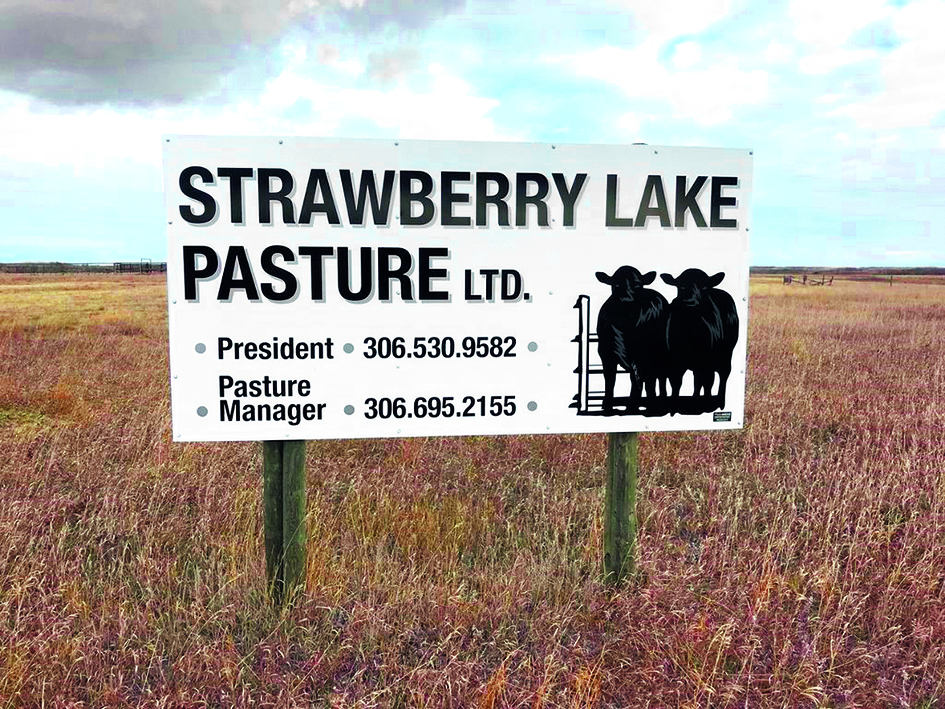 New signage at Strawberry Lake Pasture north of Odessa has become a source of local debate in recent weeks.

The pasture is currently classified as a patron-operated pasture (POP), as it has since it was phased out of the provincial government’s Saskatchewan Pastures Program in 2019.

Up until that time the Strawberry Lake land had been classified as Crown (government-owned) land and was open to use by livestock farmers, hunters, berry pickers, bird watchers, and all-terrain vehicle users, among others.

Since the transition however, while the land continues to be owned by the provincial government, it is currently being leased to private citizens.

Today the land in question is managed by a regional patrons’ board, and this fall the land’s users were greeted by a “no trespassing” sign at the pasture’s entrance.

“The sign went up a couple days before deer hunting season began,” Odessa-area resident and hunter Arden Curts explained. “I spoke to the pasture manager, who explained to me that the sign was more for quadders and ATVers, but how do other people know that when all the sign says is ‘no trespassing’?”

Tyler Davidson, who farms south of Qu’Appelle, is the president of the newly-organized pasture and said the signs have been posted for good reason.

“We are asking for people to contact us before they go onto the pasture,” he said. “That’s the purpose of the sign. It is just so that we know who is out there. It is about accountability, so that hunters and visitors know what is expected from them when on pasture land. We’ve had issues with things like quad traffic, campfires and the spreading of noxious weeds like leafy spurge and absinthe. We spoke to the Ministry of Agriculture about the signage and they gave us permission to put them up.”

According to Hall, the patrons have the right to exclude traffic throughout the pasture, within certain parameters.

Among those potential conditions are when “an emergency is declared by the minster, such as extremely dry conditions” or when “the lessee is required to do after-hours work such as repairs then they may restrict access to the area in which they are working for safety reasons.”

Reasons that are “reasonable” and “pre-approved” by the ministry may also be permissible, according to Hall, with the ministry then in charge of communicating these reasons to the Ministry of Environment as well as the Saskatchewan Wildlife Federation (SWF).

Curts, who serves as president of the SWF’s Save A Goose chapter, says however that no such notice has been given concerning current ministry-approved restrictions to the pasture.

The Strawberry Lake Pasture, like other pastures, was allowed to restrict access due to the fire hazard risks earlier this year. Given the recent change in weather conditions this restriction has since been removed. Davidson said the Strawberry Lake Pasture board also spoke with the agriculture ministry’s lands branch concerning the “no trespassing” signs.

Hall expanded on that by saying that the pasture’s management was previously advised “if the pasture is to require hunters and others to contact them first, they will need to update their signs to include contact information.”

That information currently appears on the sign at the entrance to the pasture.

(WMZs are wildlife management zones, and Odessa falls within WMZ 17.)

Davidson says that reasonable access has been allotted to hunters.

“No one has been denied access. We are aware of the rights allotted to hunters. We are just asking that they call beforehand. It shouldn’t be that big of a deal.”

Curts says that, while he was granted access to the pasture when he called the pasture manager, the problem is much bigger than that.

“If someone from Moose Jaw gets drawn to this zone for hunting and they follow the Hunters and Trappers Guide and drive out to the pasture to hunt, they are going to see that sign and think it pertains to them,” he said. “They don’t know the difference. The contact information is a number written with a permanent marker at the bottom of the sign. You can’t even see it until you are right up close and this isn’t just about hunters.

“Local berry pickers come out each year. A bird watching group from Indian Head visits the pasture. I know a lady walks her dogs when it’s open. This pasture is important to the entire community. I understand a sign stating ‘no ATVs or no dirt bikes’ due to possible damage. Having a sign that lists the things the patrons expect is understandable, but not just a ‘no trespassing’ sign.”

This article is one of several selected from our Nov. 25 edition for online publication in full. To receive more content like this on a weekly basis (rather than whatever we decide to post online whenever we get around to it), subscribe to The Forum today.

A lengthy dispute between the Town of White City and RM of Edenwold over the town’s proposed annexation of RM lands is, at long last, heading for a resolution. Six days of public hearings on the matter have been scheduled by the Saskatchewan Municipal Board, beginning with oral submissions the morning of Nov. 23. The…

For the first time in over 15 years, Sedley ratepayers will soon see a new face at the village administrator’s desk. Samantha Gillies, who started in what was then called the position of village clerk on Oct. 1, 2007, resigned from her role as chief administrative officer effective end of day Monday. At the time…

Krissy Hofer wants to see kids in the Quad Town area playing flag football in the Regina Youth Flag Football organization’s fall league next year. Hofer is planning to have teams practice once or twice each week in Sedley at the village’s old football field near the school before their weekend games, as long as…

EDITORIAL: ‘Living’ with COVID not quite what it seems

It’s amazing what people can get used to. For the first time in months, we reported last week on Saskatchewan’s COVID-19 numbers. What we found, via the province’s own data, was that COVID is now killing about half as many Saskatchewan residents per day compared with the worst three-month stretches of the pandemic. That’s the…

From The Vault: Larger catastrophe barked back as Francis fire destroys two homes

[This story was originally published in the May 21, 2015 edition of the Quad Town Forum.] Man’s best friend is being credited with preventing a local disaster from ending up any worse, after a fire completely destroyed two homes in Francis last week.

The Balgonie Bobcats Fundraising Committee is nearing the end of its fundraising campaign for a ninja obstacle course on the Balgonie Elementary School grounds.

Kronau Heritage Museum reported an increase in program revenue, ideas for future fundraising events, and updates on facility upgrades at its Feb. 26 annual general meeting, which was held online.

Vibank residents may be voting in a by-election next month, after village council accepted deputy mayor Roger Ecarnot’s resignation Feb. 22.

EDITORIAL: ‘Living’ with COVID not quite what it seems